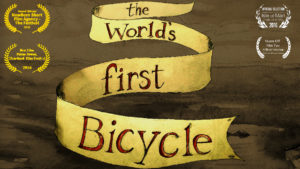 It’s inspired by the story of Kirkpatrick Macmillan, a blacksmith from Dumfries-shire in rural Scotland who arguably invented the world’s first bicycle. He was also a fiddler, an organist at the local kirk and a part-time dentist working in the tiny village of Keirmill back in the 19th century.
This story surrounds the supposed wager that took place between Kirkpatrick & his sceptical friend Jim, and his attempt to prove the roadworthiness of his “velocipede… of ingenious design”

Rock Opera is an audio visual attempt to fuse geology with music, centred around polymath James Hutton, as seen through the eyes of Sarah, a 12 year old girl. I was commissioned by Dynamic Earth to develop a game and app which you can download here.

With a firm foundation in music and a strong visual awareness I’m  drawn to the world of animation and blessed with the good fortune of working with animators such as Kate Charter,  Jim Stirk, Adam Gierasimuik and  Clare Lamond on great projects such as Unsung Stories.

A lot of my work is alongside young people with autism as it’s proved to be a very effective platform to explore self-expression and emotional communication through creativity. Go to the Hoda Page if you wish to see more examples or get in touch with me here if you want to find out more.